(The children grew with every scene of this dream and one after another, became a different younger cousin of mine.)

My aunt, mother and I were in the public bathroom with a young child who needed to use the toilet. My aunt put her on the seat and she slipped down under the water. She was squashed into the bowl and completely submerged, looking up at us. The image was similar to a formaldehyde specimen baby. The other women in the space backed out of the room. I was eager to get her out before she died so I grabbed her.

However, she (now A.) still needed to use the toilet.

Now there were other children around. A.’s legs were longer and she could talk. I got a mesh toilet seat, not quite right but better than her drowning. Her (now C.) legs were in the toilet but the mesh would catch the waste.

She finished so I lifted her off and she was a boy (now D.). The mesh hadn’t worked; it had become a metal tray. There was a mess everywhere and the smell was incredibly bad. I could not stand it. [I didn’t know you could smell things in dreams.] I was struggling to get away from it but I was also really trying to clean up the child and all the surroundings. I was encouraging him (now L.) to clean up but he had grown into a young teenager and was only interested in going off with his friends. He walked away fully dressed, scratching his backside.

We—Dave, my brother; Caitriona, my cousin; Shane, her brother; and the grown children of my aunt—were in a restaurant. Shane had paid for the meal. I was late, having come from getting the children ready. I ordered salmon. Shane ordered dessert behind the partition. The restaurant seemed to be closed. He didn’t say that he had paid. My brother also went and ordered dessert so now there were two.

I got into a car that was slightly out of control. It was my car and I was in a city like New York (it wasn’t busy so maybe it was Brussels), but I wasn’t too far from home. I pulled into park and the car kept going towards a Chinese copy shop. I swerved around and pulled into park in a bus stop—thinking that it was not right to do so! Finally, I got the car to stop going at the Chinese copy shop, which was now an Asian restaurant.

I was meeting artist friends at the Asian restaurant. It was very busy—not full of people—full of dirty dishes. While the owner was ringing up checks at the register and handing out plates, we discussed the formal way I was going to address the dignitaries to whom I was about to make a speech. It was supposed to happen very soon and it was all news to me. “Failte a ghrá” (Welcome, my love), I was going to say. Apparently, according to the owner, this wasn’t appropriate. She was making suggestions but they didn’t sound right. I was going to have to call a language expert.

I took the call downstairs. Everyone talked to him first and then passed the phone over to me. The language expert was Rob Katy, (Will O’Kanes /Jeff Schneiders dealer in New York).  When I finally got on the phone, he asked, “What can I do for the woman you’re showing with? The one with the orange paintings?”

Then I was alone. They had all got off the line and the phone cut off. I went back upstairs to ask Will/Jeff why I had been talking to the dealer and what was happening? Will/Jeff said, “Oh, well he wrote a film last year, ‘Kowloon into the Wonderland.’[1] You can see it online.” So I went off to do that.

On the way I met a teacher, who asked about the little girls. 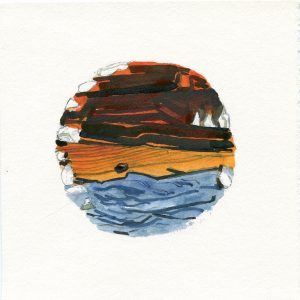 She said she was sorry about my cousin (he had died). Then she said, “I feel responsible for the stalking incident.”

[1] When I awoke, I googled this title to see if it exists. It does not.