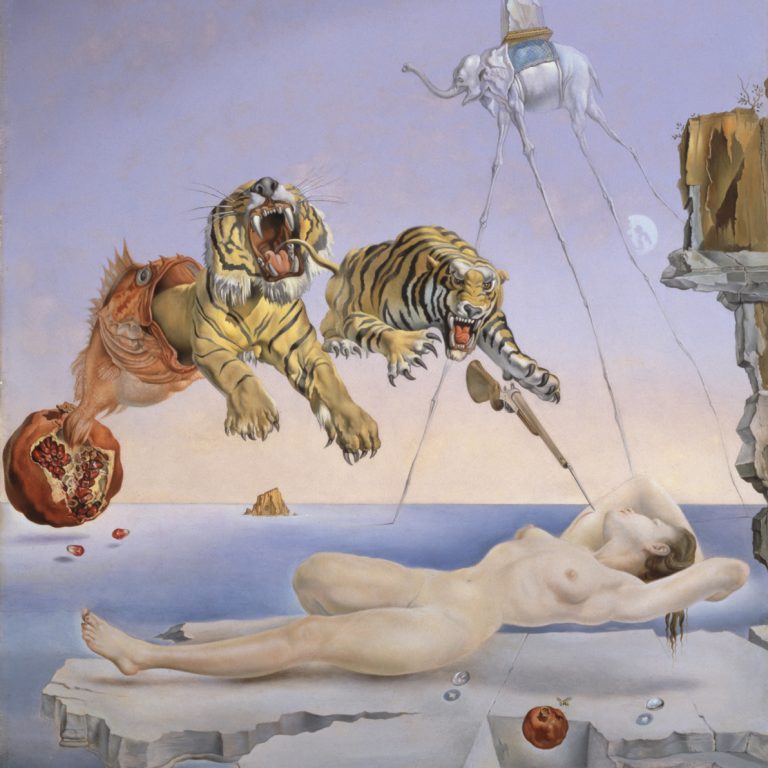 If you are a man under the age of 70, avoid the ladies in grey or green wool suits and furs

Of this painting, Dalí said (in 1962, the year of: John Glenn’s first orbit of the earth; the Cuban Missile Crisis; the first packet of salt and vinegar flavoured crisps sold in America): “to express for the first time in images Freud‘s discovery of the typical dream with a lengthy narrative, the consequence of the instantaneousness of a chance event which causes the sleeper to wake up. Thus, as a bar might fall on the neck of a sleeping person, causing them to wake up and for a long dream to end with the guillotine blade falling on them 2 2   The guillotine reference is to Alfred Maury's dream, La Guillotine, see Dream 1861. This dream is a dream to specialists who favour a materialistic, biological interpretation of dreams, such as Lydiard Heneage Horton. -the noise of the bee here provokes the sensation of the sting which will awaken Gala.” *

*For fun, google ‘sting which will awaken gala.’ (Gala was Dalí’s wife.) 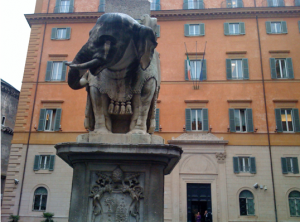 Concerning Dalí and Gala (according to Luis Buñuel, from his autobiography, My Last Sigh):

‘One day we all went in a rowboat for a picnic among the rocks […] and I said to Dali that the view reminded me of a Sorolla (a rather mediocre painter from Valencia).

“How can you bear to say such stupid things!” Gala shouted at me. “And in the presence of such gorgeous rocks!”

By the time the picnic was over, we’d all had a great deal to drink. I’ve forgotten what the argument was about, but Gala was attacking me with her usual ferocity when I suddenly leapt to my feet, threw her to the ground, and began chocking her. […]  Dali fell to his knees and begged me to stop; I was blind with rage, but I knew I wasn’t going to kill her. Strange as it may seem, all I wanted was to see the tip of her tongue between her teeth. Finally, I let her go, and two days later she left.

‘Dalí has told many lies, and yet, paradoxically, he’s incapable of lying. Much of what he says is only to scandalise, like the time he went to the Museum of Natural History and claimed to have been so stimulated by the dinosaur skeletons that he’d had to take Gala out into the corridor and sodomize her. This is obviously a joke, but Dalí’s so bemused by himself that everything he says seems to him the absolute truth.

Dalí’s also a great fantasizer, with a certain penchant for sadism: but in fact his sex life was practically nonexistent. As a young man, he was totally asexual, and forever making fun of friends who fell in love or ran after women–until the day he lost his virginity to Gala and wrote me a six-page letter detailing, in his own inimitable fashion, the marvels of carnal love. (Gala’s the only woman he’s ever made love to.) Of course, he’s seduced many, particularly American hieresses; but those seductions usually entailed stripping them naked in his apartment, frying a couple of eggs, putting them on the women’s shoulders, and, without a word, showing them to the door.)’