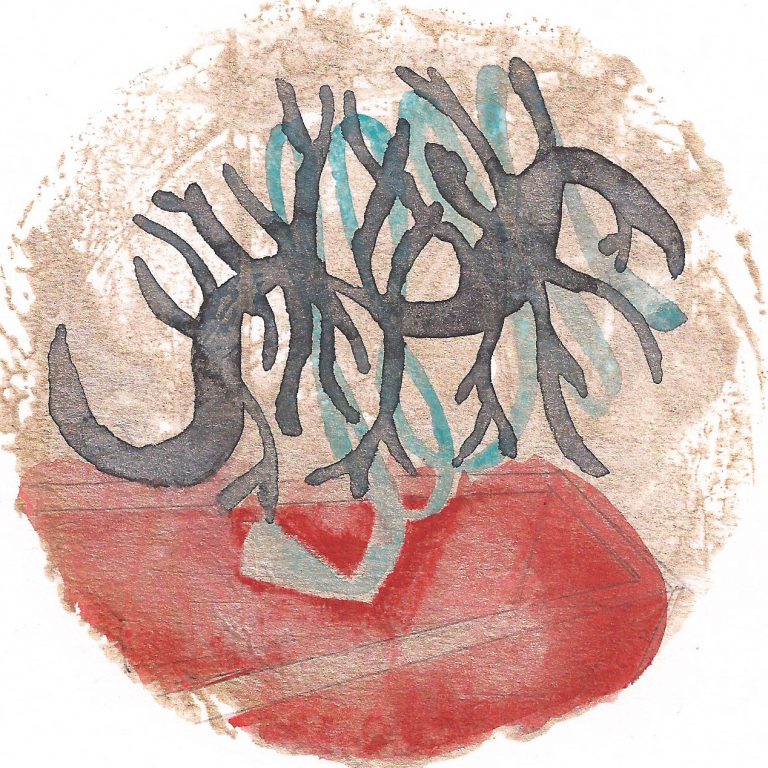 Susan settled into a blue coffin/cabinet but I felt afraid. Robert tried to sell me on a tomato-red one.

Susan and I were at a camp or a private club. The wood-panelled labyrinth of rooms contained hundreds of leather wingback chairs. Sangha members wandered about or sat in groups. It was very warm and humid. Susan assured me it was going to rain all the next day. She wanted to find a spot to nap in a chair by a window.

The next day, we witnessed a Byron Katie session where Robert C. sat with her and talked about work. The topic was supposed to be heartbreak but he needed to discuss money. He said, “My company only has 268,000 dollars in the bank so I’d better make some money.” He asked the audience if anyone knew how to make some quickly but it was all a bit tongue-in-cheek, as if he didn’t really mean it.

Christopher had stripped down to his underwear while we were watching the proceedings. Embarrassed, I hissed his name to get him to pull up his trousers. But now Robert was also in his underwear, as were others. The silk garments were complicated—like bras and girdles from the 30s.

Then there was a hint of the OUTSIDE THREAT. Perhaps a rumble or distant shouting.

After the Byron Katie portion of the evening, we had a party at ABC Carpet & Home. Everyone wore formal attire. As part of the gathering, we watched a ceremony. I had a special vantage from the point of view of the guru, who presided over the party, or from a monitor behind his shoulder. Although there was a band, the concert mainly consisted of a procession of people coming up to the woman in front of the guru and tapping her on the head with an elegant crystal baton. We were supposed to lightly tap her. However, one young man struck her with great force. The audience gasped but no one did anything to stop him.

I grew very angry and went searching for the man, intending to give him hell, but now the event had spread throughout the building and it was increasingly difficult to find him, or anyone, in the chaos.

In my search, I briefly returned to the summer camp/clubhouse. I entered a room and noticed that many people were now very stoned, slumped in chairs lining the walls. I asked someone if he had given them heroine and he replied, “But of course.”

Back at the ABC Carpet building, the OUTSIDE THREAT progressed to the other side of the double doors, rattling the locks. We decided it was best to go to the top floor—which turned out to be a coffin showroom. As we arrived, I heard the coffins clicking open, preparing to receive bodies. Robert seemed to know the showroom well and began explaining how the coffins worked, which looked like upholstered Mid-century Modern cabinets on their sides. The fabric was brightly coloured wool. Susan settled into a blue coffin but I felt afraid. Robert tried to sell me on a tomato-red one.

A continuation of the party erupted on the other side of the showroom, behind a partition. I peeked around and saw many people setting up mirrors and hanging jewellery and silver baubles from structures made out of bicycles and chairs. It was quite lovely but frivolous.

Robert said, “They seem rather concerned about how they look.”

I replied, “But that won’t be important where they’re going.”

Then I returned to the tomato-red coffin and knew I had to force myself to get in or the Outside Threat would get me, as surely it was going to get the frolicking fools in the other room.